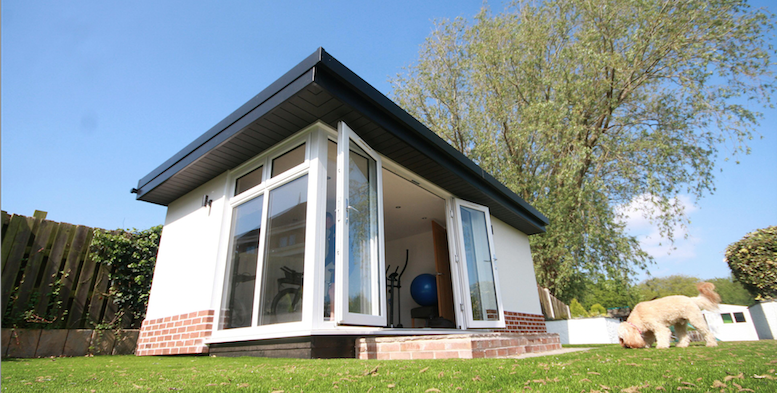 A Garden Room for a GB triathlete is helping Paul get in tip top shape for the World Championships amid the scenic surroundings of his back garden – courtesy of a new purpose-built gym.

Paul Beverley, 48, has a “room with a view” to complete his last push for glory after commissioning Rubicon Garden Rooms to build a luxurious training facility in the garden of his home in Lytham St Annes.

The talented athlete is in the final throes of an intense six-month training regime which will see him compete in the forthcoming ITU World Triathlon Multisport Championships between April 27 and May 5.

Paul, who works from home for American software firm Advanced Solutions International, supplying software to charities and not for profit organisations, is heading to Pontevedra in north western Spain where he will compete in the Long Distance Triathlon on Saturday 4 May.

The contest, which is the highest level an amateur triathlete can compete in globally, will see Paul undertake a gruelling 2.4 mile swim and 112 mile cycle ride before finishing off with a 26.2 mile marathon in a bid for the world title.

Paul, who last year finished 17th in the world in the same contest in Denmark, turned to Rubicon to provide an “all weather” venue for training  as well as a secure place to store his vast array of technology and equipment.

“Primarily the Garden Room was built for me to do my cycle training to stop me having to ride outside in all sorts of weathers,” said the father of two, who lives with his wife Anne, a local vicar, and daughter and son aged 13 and 10.

“I’ve moved from a smelly corner of my garage into a dedicated room which is fantastic.

“It definitely has more light than the garage and there’s also better view. I can look out to the countryside which is far nicer than looking at a concrete wall!

“It makes a big difference and makes training more fun and enjoyable.”

“The kids sometimes want to come and use the exercise mats and my wife has a cross trainer. It doubles up as a family gym.”

Paul, who is sponsored by his employers and was selected to compete for his country in his age group after successfully qualifying in an earlier Ironman triathlon competition, has been training for the World Championships for past six months, undertaking up to 18 hours per week.

His new 6m by 3.4m garden training suite contains two rooms; one for indoor training on his turbo trainer and the other for storing his bikes.

It is big enough to accommodate a vast array of screens which record live data from his sessions including heart rate, speed, cadence (the speed at which the pedals are being turned and how many revolutions per minute are being accomplished) and most importantly, power output.

Paul had a clear picture of how he wanted his garden gym to look from the outset.

“I basically looked around for someone who was relatively local who could provide the kind of building we wanted and which would match up to our home,” he said.

“Our house has a particular style and we wanted the garden room to blend with it. I could’ve have bought a wooden box from anybody but I needed the wooden box to look like I wanted it to so it was all about the design for us.

“We searched online and came across Rubicon. They could do what we wanted which was to create a white, rendered finish rather than wood which matched the rendering on the house. We really wanted something that looked like it had always been there.”

The garden room, which features brick plinth to match the house, and an extended roof, benefits from a separate internal store room, full electrical supply, wifi and ceiling spotlighting.

John Lyon MD of Rubicon Garden Rooms, based in Deeside North Wales, said: “It was a pleasure to be able to build this room for Paul. We’re really excited it will help him train and our staff will be cheering him on from the UK as he represents Great Britain in the World Championships.”

“The Rubicon team completed on time and were fantastic,” said Paul, who regularly achieves a podium finish in UK triathlon races.

“John kept us up to date with the timings. Everybody was great. You couldn’t have wanted any more. We would highly recommend Rubicon Garden Rooms.

“The actual build took around three weeks. Within 10 days the flooring was down and it had been decorated.”

Now just days from competing in the World Championships, Paul says it is time to take the foot off the pedal and mentally prepare for the occasion.

“For the last two weeks you just tick over,” he said.

“I’ll still do seven to eight hours but that’s small in comparison. A race like this requires five to six months of training. You can’t afford to be tired going into the race.

“It takes a lot of commitment to undertake a long distance triathlon. You can’t change your fitness at the last minute. I’ve been training since November.”

A top 20 world finish is quite an achievement for someone who only undertook his first triathlon five years ago.

“I’ve played all kinds of sports and wasn’t particularly a swimmer, cyclist or runner but averagely good at all which helps,” he said.

“The triathlon community is also very welcoming and helpful, which is a real plus.”