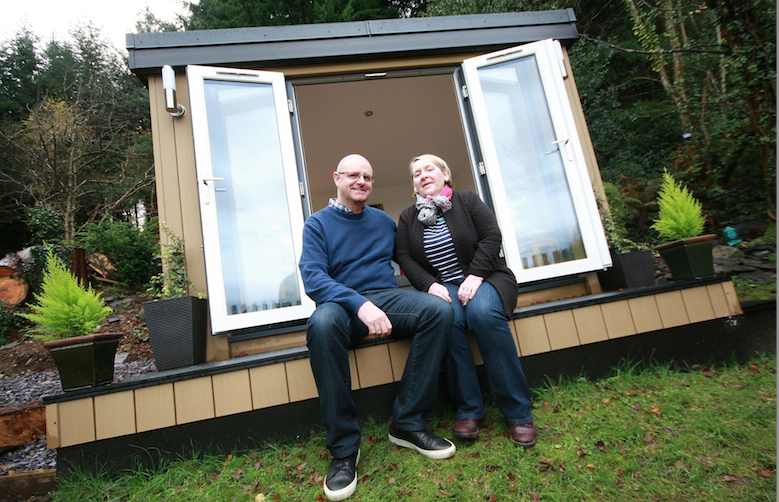 Peter and Ruth Brabin set Rubicon Garden Rooms the ultimate challenge - install a Garden Room in North Wales high up a steep slope at the rear of their 200-year-old home, on the edge of Snowdonia.

Rubicon Managing Director John Lyon took on the task - and the company’s installation team completed the project in just 10 days, despite having to move materials and manpower up dozens of steps from Peter and Ruth’s stone cottage in Trefriw.

The couple now have a stunning bird’s eye view along the Conwy valley, where they can sit and relax as the world goes by - from wildlife to RAF fighter jets on training missions. 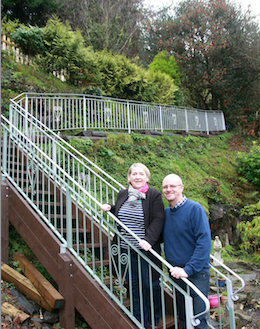 Peter, 56, is after-sales manager with the DAF trucks dealership in nearby Glan Conwy while Ruth, also 56, works for an insurance company in Liverpool - the city they are both originally from.

Peter said: “We’d not been using the top part of the garden much as it’s quite high up and was only accessible by going up quite a steep slope, which could be pretty treacherous underfoot.

“However, we decided we’d like to have something built up there to give us an extra space that we could use for just chilling out.

“To overcome the difficulty in getting up to the garden we got a local tradesman to make some proper steps and then Ruth started looking around online for some sort of garden cabin or garden lodge which we could have built.

“A lot of what was available just looked to us like glorified sheds. Then we found the Rubicon Garden Rooms website, liked what we saw on there and contacted the company. Soon afterwards Rubicon’s Managing Director John Lyon arranged to come out and see us on a Saturday morning.

“He took a look at the site, admitted it would be a challenge moving all the materials needed to build the garden room up the steps but told us they’d never been beaten yet by a site.

“Construction work started in July and the Rubicon team was on site for just 10 days from start to finish.

“Everything had to be carried uphill to the site bit by bit but the couple of lads doing it managed everything without complaint, although John did joke that they were getting so much exercise they wouldn’t need to go to the gym!”

Peter added: “What I liked about Rubicon was that they kept in close contact with us all the way through the job and consulted us about things like where we wanted the heating and power points located in the room.

“It’s zero maintenance and fully insulated so it should be very cosy in winter. 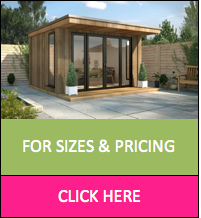 “When they finished the construction, we fitted the room out with a comfy two-seater settee and a CD player and we love to go in there to just relax and look out at the fabulous view. From the window we can see right across the valley over the river towards Llanrwst and Maenan Abbey.

“The views seem to change all the time and often you can also see RAF fighter jets and transport planes flying past, which I love to watch.

“We have two daughters and two young grandchildren and it’s so comfortable that when our daughters first saw the room they said they wanted to live in it.

“Rubicon has done an absolutely superb job for us – the workmanship and quality of materials is first class.

“I would recommend them to anyone, no matter where their garden room needs to go.”