WHAT IS A SIP? 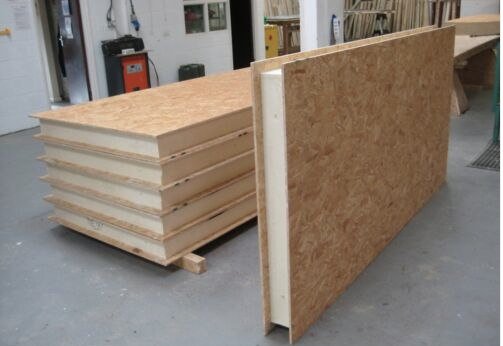 A SIP is a composite panel, consisting of a thick insulating layer of rigid core foam, sandwiched between two layers of OSB woodfibre board, which is used as a building material for walls, floors and roof structures. Some of the arguments for building with SIPS include:

Should you use SIPS on your new Garden Room Office?

When we first started manufacturing garden buildings we looked at SIPs in great detail. Being open to any new technology and innovation, we compared the pros and cons of SIPs compared to Traditional methods of construction, after all some of the large U.K. House Builders use them, so the thought was that they must be good.
Here is what the process taught us about SIPS.
FINAL CONCLUSION
So to summarise; companies supplying garden rooms will try to convince you that SIPs are a great idea due to their superior technical advantages. The truth is that the main advantages belong to the installer - quicker build times and low skilled labour, resulting in higher profits. Yes, they are marginally warmer than a Traditional timber structure, but in truth, not enough for you to notice.
But they will not mention the crucial disadvantage, the fact that they do not ‘breathe’. It’s a sealed box and, unless its ventilated, it could get very uncomfortable to work in as well as suffering the long-term problems mentioned with moist air and mould growth.
For the above reasons Rubicon rejected SIP based manufacturing early on in favour of the Traditional timber frame construction methods. These methods can take a little longer and require a more skilled workforce. But they have been proven over many decades, and crucially the resultant structures allow the timber frames to breathe (when built with correct membranes and venting techniques), whilst SIPs structures don’t. Our garden rooms and offices are designed and engineered to avoid the build up of mould and moisture over time, and we can still achieve similar levels of insulated U-Values and excellent air tightness far more reliably than you can with SIPS.
Think about it - given the above mentioned installer advantages, if we don’t think SIPs panels are suitable for building garden rooms or offices, why would you?
We primarily operate across the Chester, Cheshire, Mold, Buckley, Wrexham, Rossett, Wirral, Deeside, Flintshire, Denbighshire, North Wales, Llandudno, Colwyn Bay, Conway, Manchester, Stockport, Altrincham, Macclesfield, Lancashire, Liverpool, St Helens, Warrington, Birkenhead, West Kirby, Ellesmere Port, North West, Prestbury, Crewe, Nantwich, Preston, Malpas, Frodsham, Helsby, Heswall, Shrewsbury, Whitchurch, and Shropshire areas, but welcome enquiries from other areas within 70 miles of our Deeside base.